Berkeley Heights is a small community located in Union County, NJ with a population of 12,913. Nestled in the Watchung Mountains, Berkeley Heights is a community of comfortable homes, quiet tree lined streets, which provides the ideal setting for raising a family and enjoying life. Berkeley Heights condominiums are contemporary in design and conveniently located on Springfield Avenue. The name Berkeley Heights has only existed since 1952 when the township changed its name from New Providence Township to avoid confusion with the neighboring New Providence Borough.
Over the course of its history, the area of Berkeley Heights was known more for the villages that lie within it. The first community was Feltville, which grew up in the 1700’s with the building of grist and saw mills along the Blue Brook, now part of the Deserted Village in a county-owned park on Cataract Hollow Road.
Part of the town used the name Turkey, which was also used by the area known as the borough of New Providence. Turkey became New Providence in 1750, when the greateful community thanked the Almighty for no one being seriously injured when a church balcony gave way, collapsing on the gallery below. The name Berkeley Heights honors Lord John Berkeley, one of the two proprietors who jointly owned the east and west portions of the state.
The center of what is the town’s business area became known as Peppertown in the late 1800’s, most likely a reference to the color of the peppers Italian settlers hung out to dry during the harvest season. 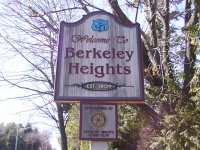 Following World War II, the population boom developed the township into a suburban community of single-family homes, and large, stable, industrial parks, most notably the Bell Technology Laboratories (now Lucent Technology), employing thousands of professional workers built in part of the township.
A community effort recently revitalized an area along the railroad tracks on Sherman Avenue near the municipal building and made it into Peppertown Park.
Runnells Specialized Hospital of Union County relocated in 1990 to its new 178,000-square-foot facility, according to marketing director Peggy A. Salisbury. “The hospital is now situated on a 45 acre mountain top tract of land in Berkeley Heights. More than 98 percent of our patients are able to return to their previous living circumstances upon completion of treatment. Our facility has a nursing unit for both long and short stays, which is staffed 24 hours a day by physicians and professional nurses.
Residents enjoy spacious parks and outstanding recreational programs for all ages. Berkeley Heights is an easy commute by train to New York City for work or play and provides access to other locations by nearby major highways. In this time of increasing development, the Township Committee is diligently working to maintain the beauty and character of our community.

Education in Berkeley Heights is divided into two excellent school systems consisting of 4 elementary schools and middle school under the local Board of Education which have modern facilities, a highly qualified teaching staff and ambitious parent-teacher organizations. Governor Livingston Regional High School is well know for its high percentage of Merit Scholars. The district is built on successful cooperation among family, school and community.

Residents can enjoy spacious parks and outstanding recreational programs for all ages. The town pool is open from Memorial Day through Labor Day. Membership is open to all town residents.

How to schedule a CO Inspection

AMERICAN TOWNS – THINGS TO DO IN BERKELEY HEIGHTS