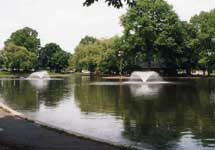 The history of South Orange dates back to May 21, 1666, when Connecticut settlers landed on the shores of the Passaic River. Guided by Captain Robert Treat and Lieutenant Samuel Swaine, the group purchased land, now known as Newark, from the Lenni Lenape Indians on July 11, 1666. Those families wishing to farm moved westward into South Orange and surrounding areas. In 1678, the Lenapes sold the settlers a second parcel of land running from the East Branch of the Rahway River to the mountain top.
South Orange Avenue, an Indian trail, served as the main thoroughfare. But in 1705, road statutes required landowners to maintain the first primitive highways. These included Main Street and Valley and Ridgewood roads. Washington and his troops often traversed the latter during the American Revolution. 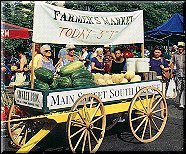 The mode of transportation graduated from horseback, to ox-cart, to stage coach. Then in 1836, the Morris and Essex Railroad developed a single track between the Village and Orange and operated a horse-drawn cart. A year later the line was extended and two cars were pulled by a wood-burning steam locomotive. The advent of the railroad established South Orange as a suburb of Newark and a summer resort. Just after the railroad was continued through to Hoboken in 1868, the Village began its rapid transformation from a rude settlement of farms and mills to a polished residential railroad suburb of New York and Newark.
Swamps were drained, roads were constructed and gas lines were laid in the 1890s. Sewers and running water were later added. Street lamps in the town’s center burned sperm oil until 1860 when gas service became available. Electric power was brought into the Village about 1888, although most of the streets are still lit by gas lamps. The first telephone exchange was opened in Orangeon December 6, 1879. In 1899, a Village central office was established.
The Village Hall, built in 1894, housed the fire department until 1930 when it was moved to Sloan and First Streets. The police department then moved from its 1872 building just west of the railroad into the newly vacated space in Village Hall. In March, 1972, a separate police station and Municipal Court building on South Orange Avenue was completed. 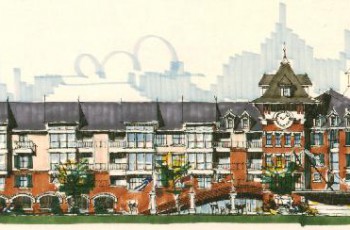 The first U.S. Post Office was opened in 1841 in Freeman’s Store at 71 South Orange Avenue but the Postmaster reported “receipts so dreadfully small” that business was suspended. In 1843, another office was opened to serve the thirty families nearby. In all, six different sites were used until 1937 when our present first class Post Office was opened on Vose Avenue in a new building of its own. Free mail delivery started in 1899.
Built about 1680, the Stone House is the oldest in the Village and is still standing on South Orange Avenue near Grove Road. The colonial house at 167 North Ridgewood Road was built by Henry Squier in 1774 and acquired by William Redmond when he bought the Squier farm in 1850. Later the house was leased to a dairyman named Flood who pastured his cows in what is now Meadowland Park. Flood’s Hill in the park, used for winter coasting, was named for this family. William Redmond built the brownstone mansion for his home which is used today by the Orange Lawn Tennis Club. Another landmark, said to have been built around 1830 and standing until after 1881 when it was destroyed by fire, was The Mountain House, a fashionable water-cure supervised by two physicians, where spring water piped down the mountain to it, was thought beneficial. A large wooden structure with two wings, set in spacious grounds on Ridgewood Road, at the foot of the present Glenside Road, the hotel accommodated 150 guests. Mr. Lord of Lord & Taylor owned it in 1850 and leased it to G. Baird. The Eclipse Stage Line operated in 1830 between the hotel and Newark. Today the sole reminders of the resort are Mountain Station and Mountain House Road, both established to accommodate hordes of visitors who once flocked here. 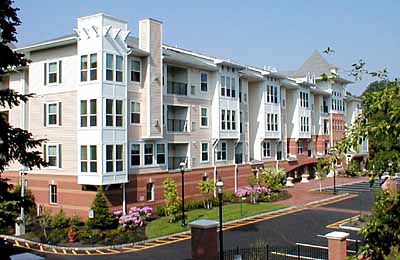 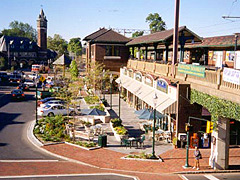 South Orange is a 2.8 square-mile community spread out east of New Jersey’s South Mountain. Thought fully developed, South Orange retains some vestiges of village life, including gas street lighting. Utility lines are in the back yards, rather than cluttering streets. The town of 16,390 people has an active downtown business section and several popular restaurants.

South Orange is a quaint residential community boasting authentic Tudor, Colonial, and Victorian homes, streets dotted with gaslights, beautiful parks, and a bustling Village center. The Montrose Section of town provides the setting for mostly large, vintage homes, replete with interesting and varied split-levels, sitting atop South Orange is an elegant setting. South Mountain offers diversity in housing, with most homes dating back to the turn of century, set along the side of the mountain. These three areas offer homes from $300,000 to the upper ranges. There are also homes available from the low $100’s in pleasant neighborhoods around town.

AMERICAN TOWNS – THINGS TO DO IN SOUTH ORANGE